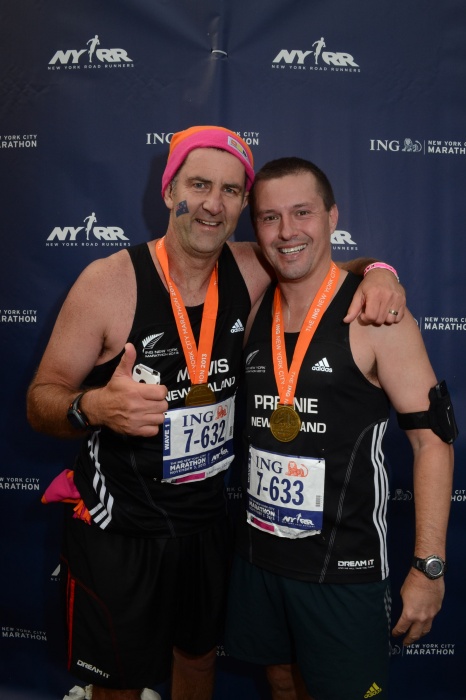 I had always played plenty of sport especially rugby but gave all that away when the kids arrived shortly after the millennium. As you can imagine, life was pretty busy with babies and exercise went out the window. Eating of course didn’t! This is where Mavis comes in.

Mavis was a regular at our house after a big training session and would eat like a horse.  Whilst at the same time getting into great shape for the IronMan. This was the inspiration that I needed in order to get back into shape – I wanted to eat more but lose weight! It’s either go hard or go home, so with the usual bravado, I decided to enter the Rotorua Marathon but foolishly chose to organise my own training via the traditional route – a mate who knew a couple of things (not Mavis by the way). Race day arrived and I had done what I thought was plenty of training plus I had Mavis as company to run it with me. No nutrition plan. No hydration plan, apart from a can of flat coke at 30k’s. But the personal goal of finishing it under 4 hours. No Chance. Apart from running it with Mavis, it was a god awful experience – first half was fine, but second half was just pain. All that said, I was chuffed to finish, all be it in a very modest 4.46. That was a marathon ticked off, no more for me! Or so I thought.

Fast forward to 2012 and by now Mavis had set-up DreamIT. I had continued to run and had long decided to stick to the occasional half marathon and never go through the torture of a marathon again. Over a couple of beersies with Mave and another buddy, Rhys, the topic of New York came up. No way no how, not after the last experience of a marathon! But, it was two of my best mates. Plus my beautiful Pauline having run it a couple of years earlier, thought it was a great idea. So, after much soul searching and having convinced Pauline to do it again, we signed up.

This time I was going to do everything by the book and listen to the experts. Thank goodness for Mavis and DreamIT!

Training was a solid 6 months and wasn’t without its problems. For example, I thought I had a knee problem but found out about something called an IT band – got that one sorted. Pulled a calf doing hill work, got that sorted and stayed away from hills. Always listening to Ady and Mavis. Rhys had a nightmare on the injury front and pulled out. Pauline was also struggling with injury but battled through – hours on an elliptical trainer – yuk! As they say, the hardest part really is getting to the start line.

Plenty of great times were had during the training and the variety was really surprising. Half marathons were being done for fun and as part of the training. All the kids (6 of them by this stage) were involved and even entered a couple of races. Great for all the family.

On race day, we were fully prepped and had our nutrition sorted.

Oh yes, and by the way, we drank plenty of beersies and winesies throughout the training but stopped in plenty of time – no beersies on the day before! Here’s where a little side story comes in. As I was in NY with my gorgeous Pauline, what else could I do but propose at the top of the Empire State building!?? She said yes thank goodness! So we would run the race a fiancé’s. Big night was had with Mavis and the rest of the group – a massive 2 days out from race day.

So, how did it go?  Bloody amazing!  What an experience it was.  It will always rate as one of life’s highlights and a tear often comes to my eye when I think about it.

The toughest part was 20-30km.  I was going for a time and was determined to leave everything out there. The last 12km was amazing. I knew my training had gone well and trusted in the advice that Mavis and Ady had given me – especially the nutrition. I can’t remember the amount of people I ran past from 30km that had clearly hit the wall – if only they had a team like Mavis and Ady behind them. They had given me the confidence to really dig it in. I was hoping for a sub-4 hour, but Ady had told me 2 weeks out that 3.36 was what I should be aiming for. I came home in 3.38. No words can really describe the feeling. Massively emotional, I burst into tears on the finish line and knew that I had achieved something that would be with me forever. Mavis and Pauline weren’t too far behind – let the celebrations begin!

The whole experience was amazing and I am so grateful to Mavis and his team for everything they did. They really know their stuff and without them, there is no way I would ever have had such an incredible experience.

So, if you are thinking about giving it a go – Go for it…If you can DreamIT you can DO IT!