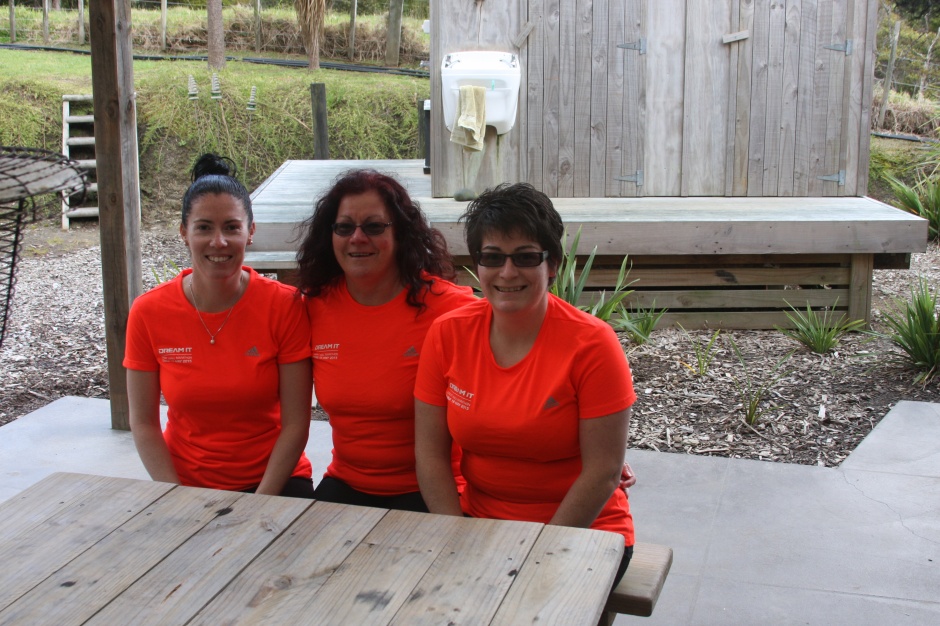 Youngest of 4, married mother of 4 – a boy and 3 girls. 6 years ago we lost our 26 year old son in a car accident, 4 months earlier my stepfather and brother in law both passed away, 2 months following the accident my sister succumbed to cancer and 2 months after that my brother also departed. In nine short months we had lost 5 of the family.

My employers suggested I take a bit of a break as “this was the best time of my life I was free to do whatever I wanted”. My response was to dig real deep – I let them know I had a job to do and they needed to stop tiptoeing around as I wasn’t going anywhere. I never let them see me less than optimal and I did pull it together. It wasn’t easy but looking back it was a doddle really because we’d already done the hardest thing in our lives. When you turn up at a hospital expecting to see your child knocked about a bit, and 2 policefolk walk through the door instead of a dr and you have to identify your beautiful child, you know you’re facing the biggest mountain you’ll ever climb.

Right now my oldest and last remaining brother’s cancer is terminal, he is under hospice care – end stage so our lives are somewhat fragmented at this point. It’s not going to be long. My coping strategy is to do the best I can for him ensuring he is not suffering. He is single and has no children so my husband and I are his sole supporters/carers.

Why haven’t I trained lately? A confronting question. Laziness, fatigue, eating to make myself feel better, having trouble doing something good for myself. My latest attempt fell off the rails due to shin pain, discouraging, I have been for a recent assessment which was a shocker but haven’t dragged myself there. Looking appalling in my gym gear is not helping.

I have attached some extracts from past efforts trying to eat and train right, also the record of training when things were going well in an effort to show I CAN do it. Not a fast runner now but, I was a 100m sprinter way back in my school days, was top sprinter of my intermediate school but never had any wind for long distance. (I didn’t know that you could pace yourself, running to me was going hard out). Only Viv’s encouragement and constant supply of Runners World got me out there and I found I COULD run – not fast but I could go this distance. 7 minutes something was my usual time per km. That was what I loved, that I could just run and run and keep going.

I’ve been treated by chiropractors and Onerahi Physiotherapy for lower back and leg pain (IT band). Acupuncture on right glute to try and release the piriformis I think. Pretty sure it all started with a handstand gone wrong a few xmas ago, I felt something tear but did nothing about it. I thought it was hamstring. Whatever, its still not resolved.

My goals? To get back “on my feet” physically and my spirit. I also like to do stuff to inspire my girls to keep them buoyed up, that although our lives got shattered we have to live all that much more because Jeremy is not here to live his life, otherwise it was all for nothing. I remember lying on our bed watching the dawn light creep across the ceiling the morning after the accident and this thought popped into my head very clearly “this could kill you……. I am NOT going to let that happen”. That’s all there was, just this clarity. And it could kill you the pain was so bad and it could also blow your marriage – I was going to hold all of us together. And I have.

We did have travel plans for a 6 week USA trip this June but everything is on hold for now. 2010 we shipped our motorbikes (Triumph and Harley) to the States and did an epic adventure across 13 states and are keen for more.

Following a rapid decline over the last four weeks my brother passed away 31st March. My blood pressure was checked on 29th March at 199/110. This has since come down to 158/87. I fully expected to return to work this week but was ordered out of action by my doctor to rest and recover. The return to life begins to today.

What’s it like a few weeks in to the marathon training plan? There have been changes. Murray’s training schedule involves a number of varying activities – some of which I never dreamt to participating in!

Last week a few of us completed our first RPM class and Mavis came along to get us set up correctly, assuring us that RPM is key to boosting fitness levels. Plenty of fun to be had with friends to share it with – Maria sure knows how to enjoy a good time singing and laughing while I’m gasping for breath and leaking from every pore!

Ady’s nutrition plan makes easy work of figuring out the correct foods and when to eat them.  I still have a few kilos to lose but the real focus is ensuring I’m eating enough protein which will help with muscle repair and development. Recently someone commented “you look taller”, I’m pretty sure they meant less wide but hey I’m happy to accept the compliment! The combination of exercise and healthy eating has had effect on my waisteline too, not a lot yet but my jeans are definitely much more comfortable. I can’t wait for the next catch up with Ady to measure my fat to muscle ratio and see how the conversion is going.

It’s been only a few weeks so far but I’ve already learnt the hard way that good nutrition and hydration are key. I had a little brush with dehydration after a couple of days of back to back trainings. My brain deserted  me for a while and it wasn’t pretty – a timely reminder for continuous fluid intake whether you want it or not!

Turning my lifestyle around has been the best decision I could have ever made. Losing my remaining sibling pushed me to the edge of a very scary place and I really felt that getting through the day was just becoming too much. But thankfully because of the increased exercise and nutritious food my mood and overall wellbeing has lifted immensely. I am also fortunate enough to have an amazing family –  a long suffering husband and three gorgeous girls who keep me grounded and inspire me to keep going.  I’m so lucky to be competing alongside my twin daughters, and if she wasn’t working in the mines in WA our youngest daughter would be running with us too. My parents, sister, brothers and son aren’t here to run and jump so we are living large because they can’t.

I’m so grateful to be able to appreciate the small things and am loving being out and about seeing spring making an appearance in gardens as I shuffle past practicing my drills.. My new shoe investment is paying off too and am already seeing less niggles that in the past have tended to become full blown injuries. I’ve managed to reign my niggels in with regular physio sessions, sorting out the issues before they turn into big problems.

I’m very happy with the way things are going and suspect Murray will be upping the ante over the coming months which I’m looking forward to. It’s great being surrounded by all this expert advice instead of blundering along hoping it’ll all be alright in the end. With Dream It’s support I’m absolutely confident that achieving this Great Wall event in great shape is absolutely do-able.

The reality is, life is full of stumbling blocks, success is turning them into stepping stones. Speaking of steps…..

A ramp up in training meant some adjustments around fitting everything in. All very do-able, just having some structure and organisation ensured no sessions were missed, giving up the Friday night drinks was the biggest surprise as it seemed more important to get that long Saturday run in with a clear head!

Making nutrient rich food choices was going to pay off, I didn’t want to have to carry any excess luggage around on event day.

Somewhere In the last few weeks of training I started to realise that just maybe the full marathon was a very possible reality. My daughters had the same expectations,after consultation with the Dream It team the decisions were made, and then I started to worry!

With so much self-doubt, concerns were shared with Mavis who promptly arranged a surprise visit with Allison Roe. She is such a lovely person who generously shared some of her experiences and outlined some coping strategies should things get tough. It was a fantastic confidence booster and came at exactly the right time.

Suddenly we are on our way to China. With emotions swinging wildly between excitement and terror, at the start line my mouth was cotton dry and then we were off. My breathing was all over the place, heart racing, and legs felt pretty unresponsive but Mavis’ pacing kept me calm, encouraging, pushing and pulling and telling appalling jokes. Rolled ankle at 7km which wanted to immediately swell, “no we’re not stopping Mavis, it will be fine”, which it was.

The day was glorious with and a welcoming breeze thank goodness because at 30 degrees it was pretty warm to be running and climbing steps and what the heck was I doing this for? What was I thinking? Me and my big mouth. That was the negativity at 18km, by 24km I was officially a long distance athlete, having never run that before. 32km felt nauseous after some very cold watermelon disagreed with the system but this too passed, then it was the long haul up the Wall again, one step at a time. Did manage to pass people at this point, they were not in great shape. Really had to rely hard on some visualisation and positive thoughts to get over the top then it was 5km downhill to the line.

Worrying about how the girls were getting on was the big motivator and crossing that finish line was the most amazing feeling – indescribable! Was it real to have just completed 42.2km – one of the toughest marathons in the world – did I just do that? Yes I did!!!

Having the whole team waiting at the finish cheering us on was incredible support and everyone was high on not only their individual achievement but the overall success of the team – we all achieved our goals and were all in great shape – yes the training was worth every minute.

We later learnt that the temperature was the highest in the event’s history, and the number of did not finishers was the highest. We were lucky to have been so well prepared by the Dream It team.

So, a goal set, met and now to set another… 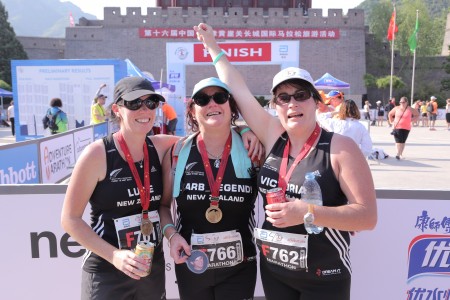